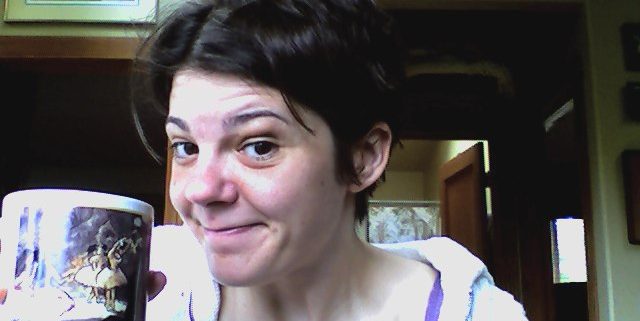 HOW TO BECOME A WRITER

by Lorrie Moore
First, try to be something, anything, else.  A movie star/astronaut.  A movie star missionary.  A movie star/kindergarten teacher.  President of the World.  Fail miserably.  It is best if you fail at an early age — say, fourteen.  Early, critical disillusionment is necessary so that at fifteen you can write long haiku sequences about thwarted desire.  It is a pond, a cherry blossom, a wind brushing against sparrow wing leaving for mountain.  Count the syllables.
Show it to your mom.  She is touch and practical.  She has a son in Vietnam and a husband who may be having an affair.  She believes in wearing brown because it hides spots.  She’ll look briefly at your writing, then back up at you with a face blank as a donut.  She’ll say: “How about emptying the dishwasher?”  Look away.  Shove the forks in the fork drawer.  Accidentally break one of the freebie gas station glasses.  This is the required pain and suffering.  This is only for
starters.
In your high school English class look only at Mr. Killian’s face.  Decide faces are important. Write a villanelle about pores.  Struggle.  Write a sonnet.  County the syllables:  nine, ten, eleven, thirteen.  Decide to experiment with fiction.  Here you don’t have to count syllables.

Write a short story about an elderly man and woman who accidentally shoot each other in the head, the result of an inexplicable malfunction of a shotgun which appears mysteriously in their living room one night.  Give it to Mr. Killian as your final project.  When you get it back, he has written on it:  “Some of your images are quite nice, but you have no sense of plot.”  When you are home, in the privacy of your own room, faintly crawl in pencil beneath his black-inked
comments:  “Plots are for dead people, pore-face.”

At home drink a lot of coffee. At Howard Johnson’s order the cole slaw. Consider how it looks like the soggy confetti of a map: where you’ve been, where you’re going – ”You Are Here,” says the red star on the back of the menu.
Occasionally a date with a face blank as a sheet of paper asks you whether writers often become discouraged. Say that sometimes they do and sometimes they do. Say it’s a lot like having polio.
”Interesting,” smiles your date, and then he looks down at his arm hairs and starts to smooth them, all, always, in the same direction.
From ”Self-Help,” a collection of short stories by Lorrie Moore. Copyright 1985 by M. L. Moore.