It wasn’t at first sight. She shook in her outdoor kennel, next to that dog who wouldn’t stop barking. Next to the pacing Airedale with long, matted hair. No, this little red dog looked like any dog, except her whole back end quivered when she sat, but her eyes stayed on you.
Say you had kids with you, say you had two. One holding your hand and one strapped to your chest. The older one just wanted to go pet cats, just wanted to look through the dogs, just to see. Then you saw this little, trembling dog.
Once you put a leash on the dog and walked ten feet away from the front door, she did that thing where they sniff the air, snort at a dandelion, and pee. She ate grass. It looked like she’d had puppies recently. Her ribs showed too much. She walked a little ahead but kept her ears pointed at you. She never pulled; she was just on a walk. Same as it ever was.
Then you and the kids sat in the grass. This dog that’d been shaking from fear rolled on her back, right in between you three, and let out a huge sigh. She went from uncontrollable fear to pure relaxation in minutes. She looked up, ever so lovingly, at your older daughter, and you saw they matched. Maybe they saw the loneliness in each other. Maybe this dog knew. Maybe all those times you told yourself that the right dog would come someday when you weren’t looking like single ladies in their late 30s say about Mr. Right had truth to it. Maybe it wasn’t just a lie you told yourself when you saw other people cuddling with their fantastic dogs. 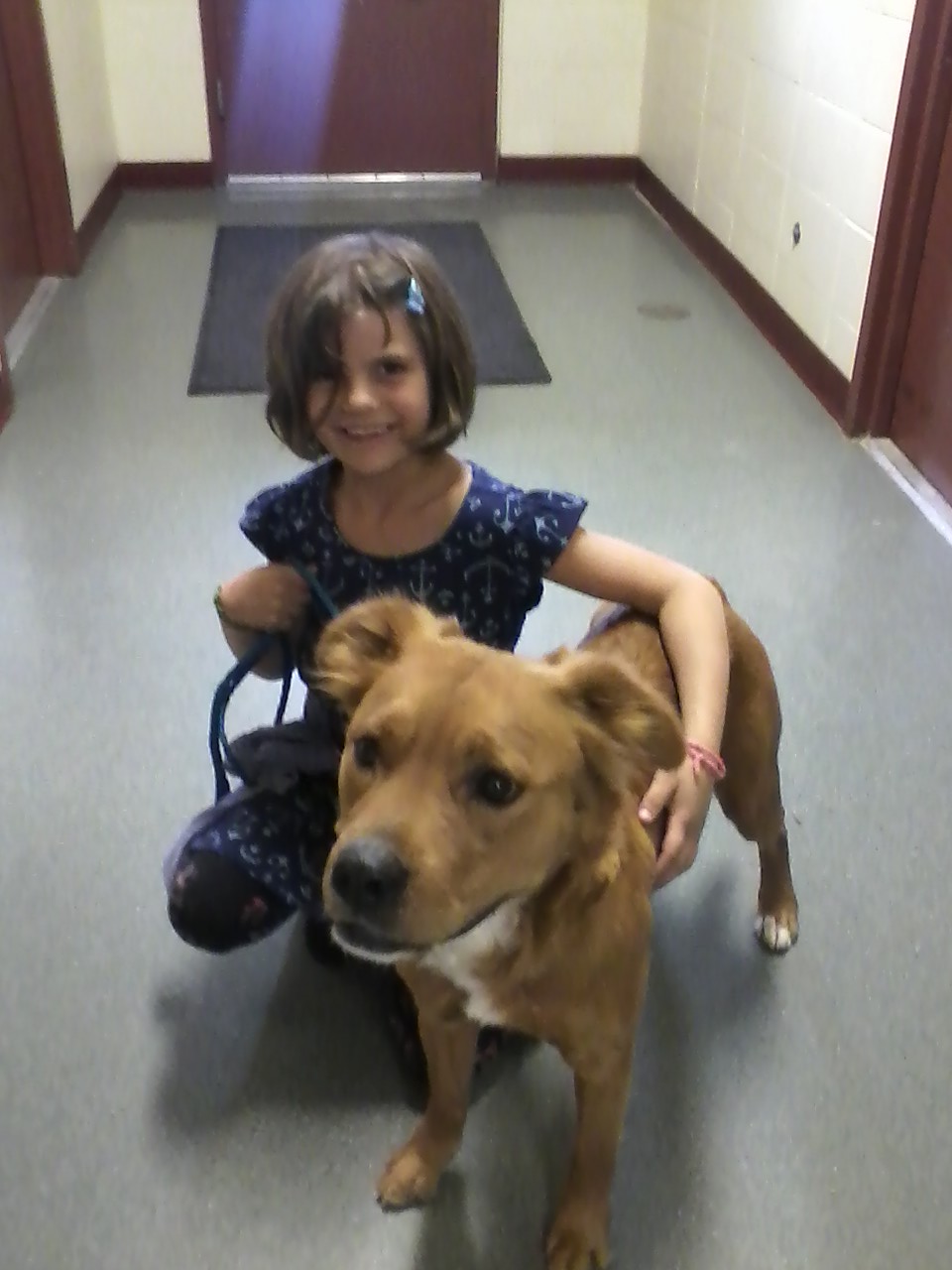 That’s pretty much how it went. I’d always told myself I didn’t have time for a dog. Told myself I didn’t have patience, or energy, or the proper space. But I asked how to apply to adopt. I filled out the paperwork on a hunch while my daughter fed her treats in the lobby. The dog’s fear and anxiety could prompt scary situations, especially with the baby who didn’t know any better and the eight-year-old who did but respected no boundary. Bringing a scared, fifty-pound dog into our little apartment could be a terrible decision. But I handed over the clipboard with my signature.
They agreed to hold her for twenty-four hours, and we had to return her to her cage. My oldest said, “Boy Mom, that little dog is going to make a family really happy. I hope she finds them soon.”
Our lease required a doctor’s note in order to get an animal. The property manager emailed me the paperwork the next morning. I called my daughter’s therapist, whose office was a block from our house, and asked if she’d fill it out. We’d talked about it already. Mia needed a dog. She had attachment and trust issues from her dad cutting their time in the summers at the last minute for three years. From her never knowing when she’d see him again every time she said goodbye. I always did my best to be the dependable one. I showed up when I said I would. I didn’t change plans. I didn’t promise things I couldn’t keep. And I’d promised her we’d get a dog someday, something she reminded me of daily.
By one o’clock in the afternoon, I’d handed in the note from the therapist that said my daughter needed a companion animal with heartbreaking honesty. The pound called and said we were approved. I drove to a box store and picked up dishes, a collar, a leash, and food. I drove to pick Mia up from school. She was expecting her Big Sister to pick her up for their weekly outing, but I stood there with a bright purple leash in my hand. Mia saw it and knew what it meant.
“Are we getting the dog?!” she said. I nodded. “Oh, Mom. Thank you thank you!”
I’d tried to talk myself out of this many times. I’d even sent texts to friends who’d also try to talk me out of it, asking their opinion. They repeated everything I’d told myself. This could go very, very badly in quite a number of ways. She was a scared, homeless mother who’d been abused. I saw too much of myself in this dog. I knew what she needed. We had that understanding already. 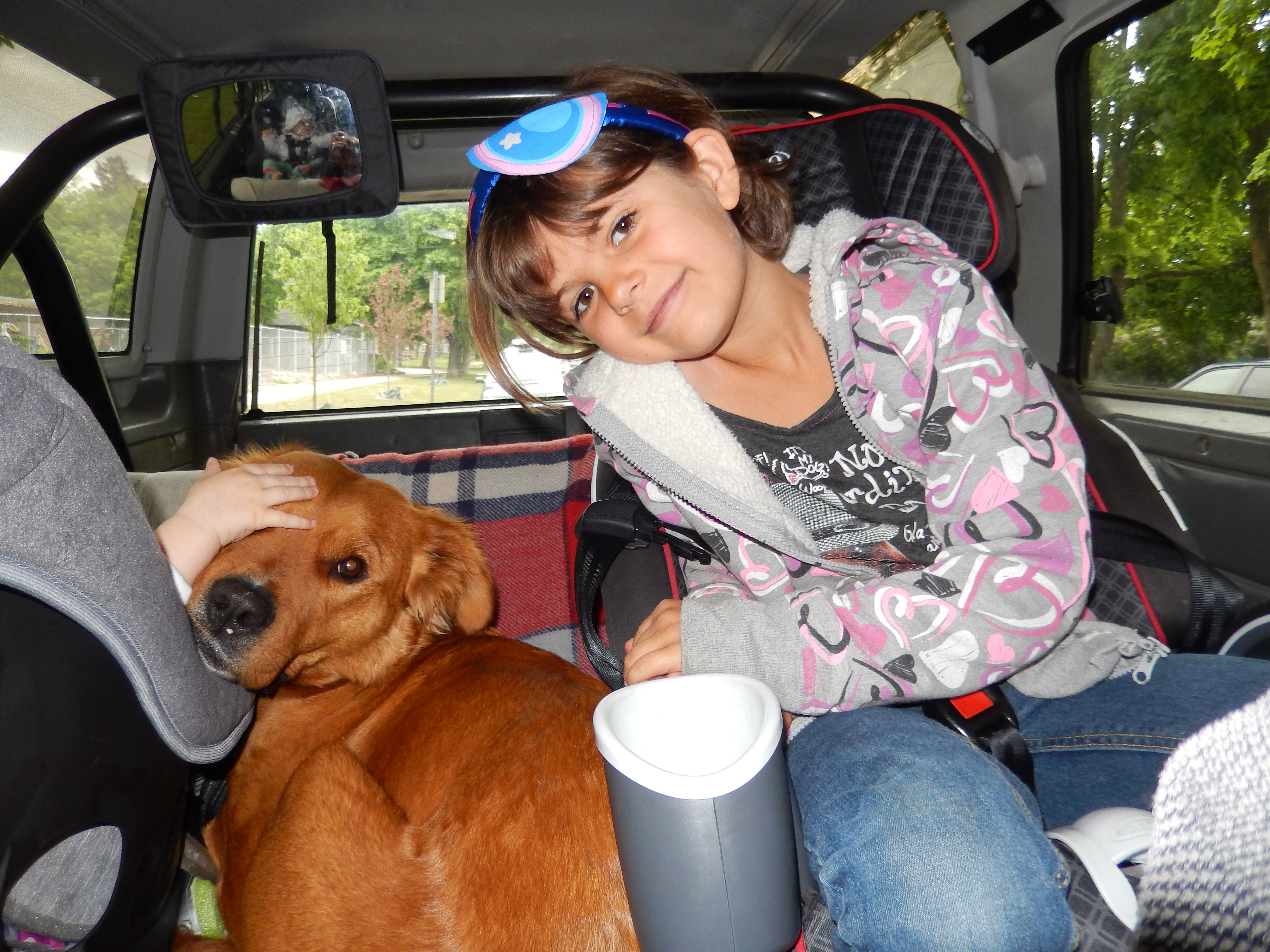 I changed her name from Yogi to Bodhi, the Buddhist term for enlightenment, the true form, and freedom from hatred. It only took her a few days to learn it was hers. She took to us completely, and trotted after Mia from the living room, the bedroom, and back. Bodhi’s curled up body became a fixture wherever Mia settled during the day or at night. After a while, Bodhi even started to appreciate the baby for her baby ways. Coraline likes to crawl over the dog’s middle when she’s stretched out on the floor, pausing to teeter on her belly and laughing.
One night, Bodhi wanted to sleep under Mia’s bed instead of with her, which caused Mia to pout and curl up in a tight ball way up on the top bunk. We’d only had Bodhi for a few days, and I woke up just after midnight to the sound of the dog pacing the hallway, whining. I thought for sure she had to poop and started to worry over how I’d get up and do that without waking the baby.
“Bodhi,” I whispered. Her head appeared immediately in the light of the hallway from my slightly opened door. I patted my bed. She leaped up, turned around a few times, and let out that huge sigh again, resting her head on my legs. My sweet dog. No doubt.
* * * 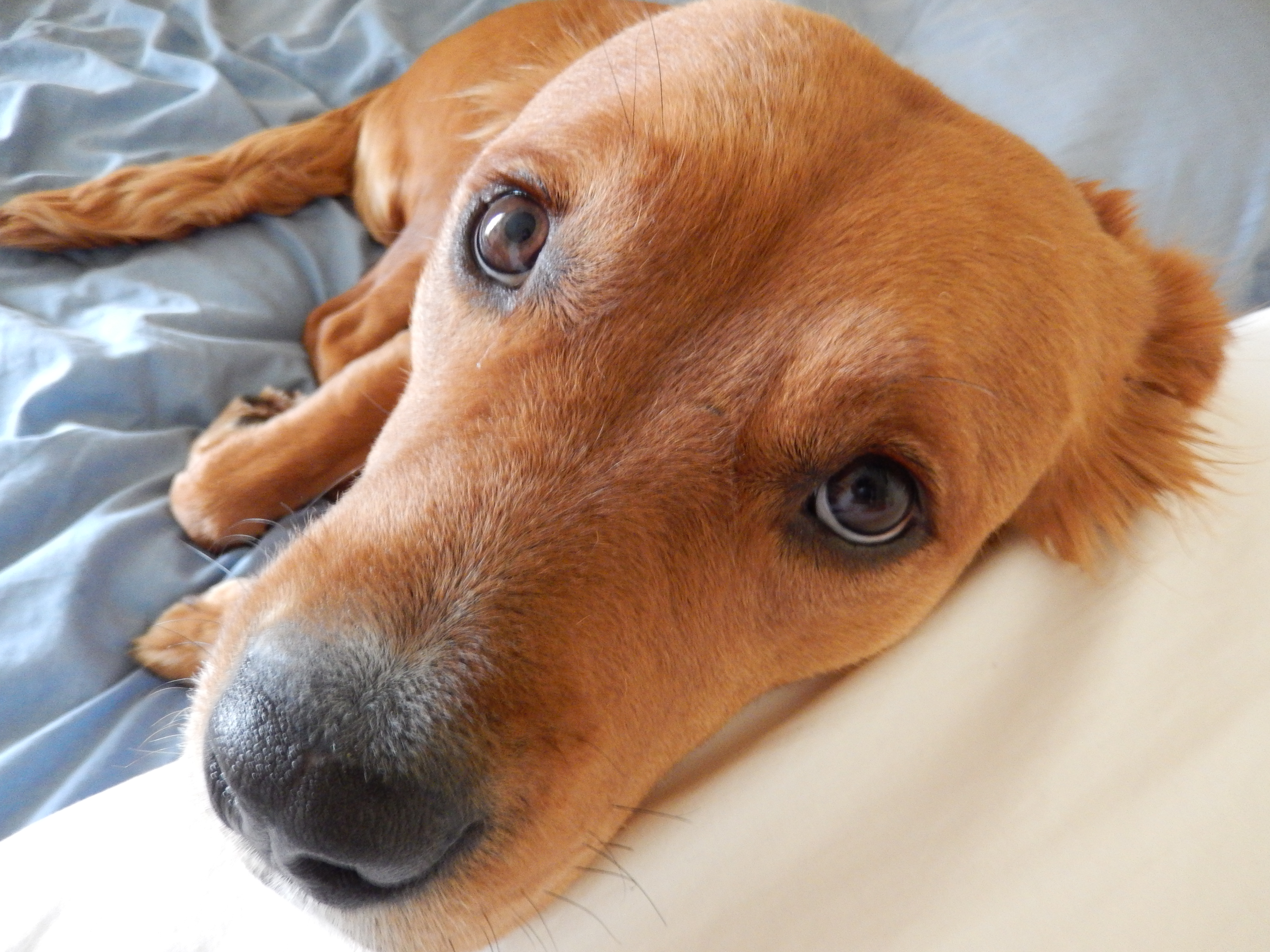 I look over at Mia and Bodhi lying on the couch together, watching TV on a lazy Sunday morning. Bodhi has her head and front leg draped over Mia’s belly. We’ll take her for a walk later, maybe to that special spot by the creek. Mia complained about having to walk the dog last weekend, but after we were out for a bit she said, “I feel happier for some reason.”
I’ve had the same reaction. I vacuum more. I find myself outside gazing up at the pre-dawn sky every morning before any coffee is made. I walk a mile a day or more. I do laundry more often. I wipe up more drips of drool off the floor. And I feel happier for some reason. A reason that comically snores. A reason that knows when I need to feel her warm, heavy head in my lap. A reason that is currently lying across my feet under the desk.
step.

A Whole Year as Three
Scroll to top