I’m writing this knowing my bank account is overdrawn, because I’m still waiting on four, unexpectedly late paychecks. I’m writing this from my couch, where my 19-month-old is sleepily nursing in my lap. I’m writing this two hours before I was supposed to meet friends for lunch, but had to cancel because of lack of funds. I’m writing this in between the tugs on my heart strings and knots in my stomach and angst of being alone.
Yesterday I went to bring my friend who’d just had a baby dinner. While I sat at her table, doing the familiar action that was holding a small baby while trying to eat, carefully picking food I’d dropped off of her incredibly new little frame, I started to seethe in jealousy and self-loathing.
My friend had a housecleaner. She had a mother-in-law staying with her. She had a husband at work who made enough to support the three of them and their house, two dogs, and two cats. She had a pile of boxes of things people had sent her, and a lot of things she’d planned to return because they ended up not needing them. 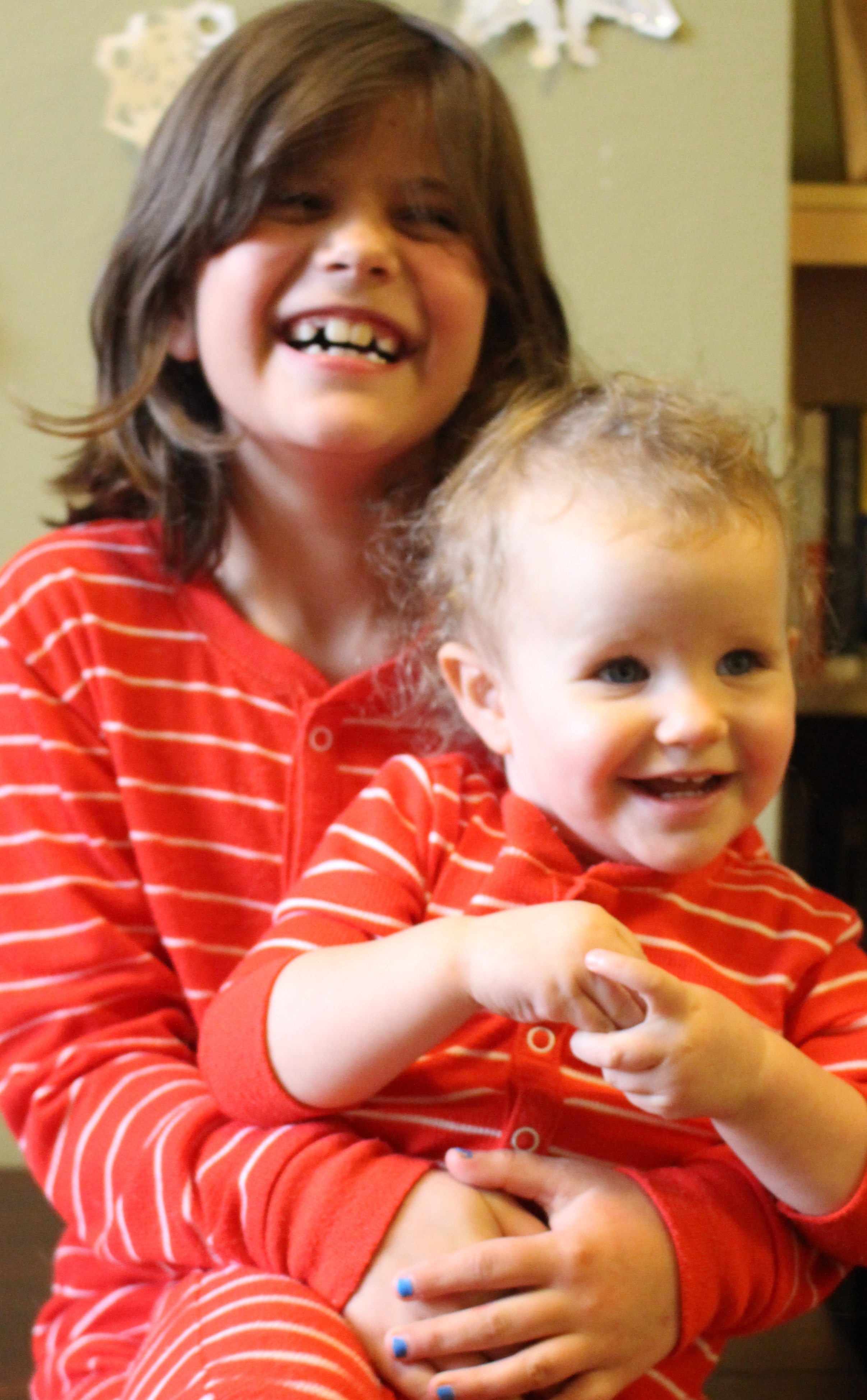 I looked over at my girls, playing so sweetly together, and thought of when Coraline was just born. I was completely on my own in an empty house just two days after I’d given birth. My cousin had stayed with us for a few days, and left us with a freezer full of pasta dishes, and some friends had brought us some food. Other than that, I was alone with a newborn who screamed if I put her down, and a rambunctious 7-year-old who, though I didn’t know it at the time, had hair completely full of lice.
Though Cora’s dad wasn’t there then, he’s here now. For the last couple of weeks, we’ve seen him almost every day. He got a full-time job and has committed to helping me pay for daycare costs while working with me on a schedule that gives him ample time with his daughter.
Mia’s had a hard time with this, of course, since she just returned from being with her dad for a week. Last night, after the visit to my friend’s house, Cora’s dad came to hang out with her for a couple of hours. I turned to Mia and asked her if she wanted to go to the store for cupcakes.
We live next to this ritzy hippie store, full of organic produce, but they also have baked goods that we can purchase with food stamps. On the way there, Mia skipped along next to me, holding my hand.
“Have I told you how much I love you lately?” she said.
I laughed and said not really.
“I love you so much, Mom,” she said. “You’re the best mom anybody could ever have.”
We ate our cupcakes, and I sat across the table from her while she talked about school, and mentioned one of her friends who was really really grumpy that day.
“Am I ever really really grumpy?” I said, knowing I was often.
“Yeah,” she said. “Like if I’m not listening and I know I’m not listening.”
“I feel like I’m kind of hard to live with sometimes,” I said.
“You’re a great mom,” she said. “You get grumpy, but you just had a baby by yourself. I know it’s hard.”
Lately it’s come to my attention that I’ve exhausted myself for a long time, and I’m beginning to feel the mental and physical toll. My hair’s about half as thick, and going gray. I don’t sleep for more than three or four hours. There are always about five things I need to be doing, not including taking a shower or going pee.
I’m looking for a therapist, though I’m not sure what it’ll do to help. 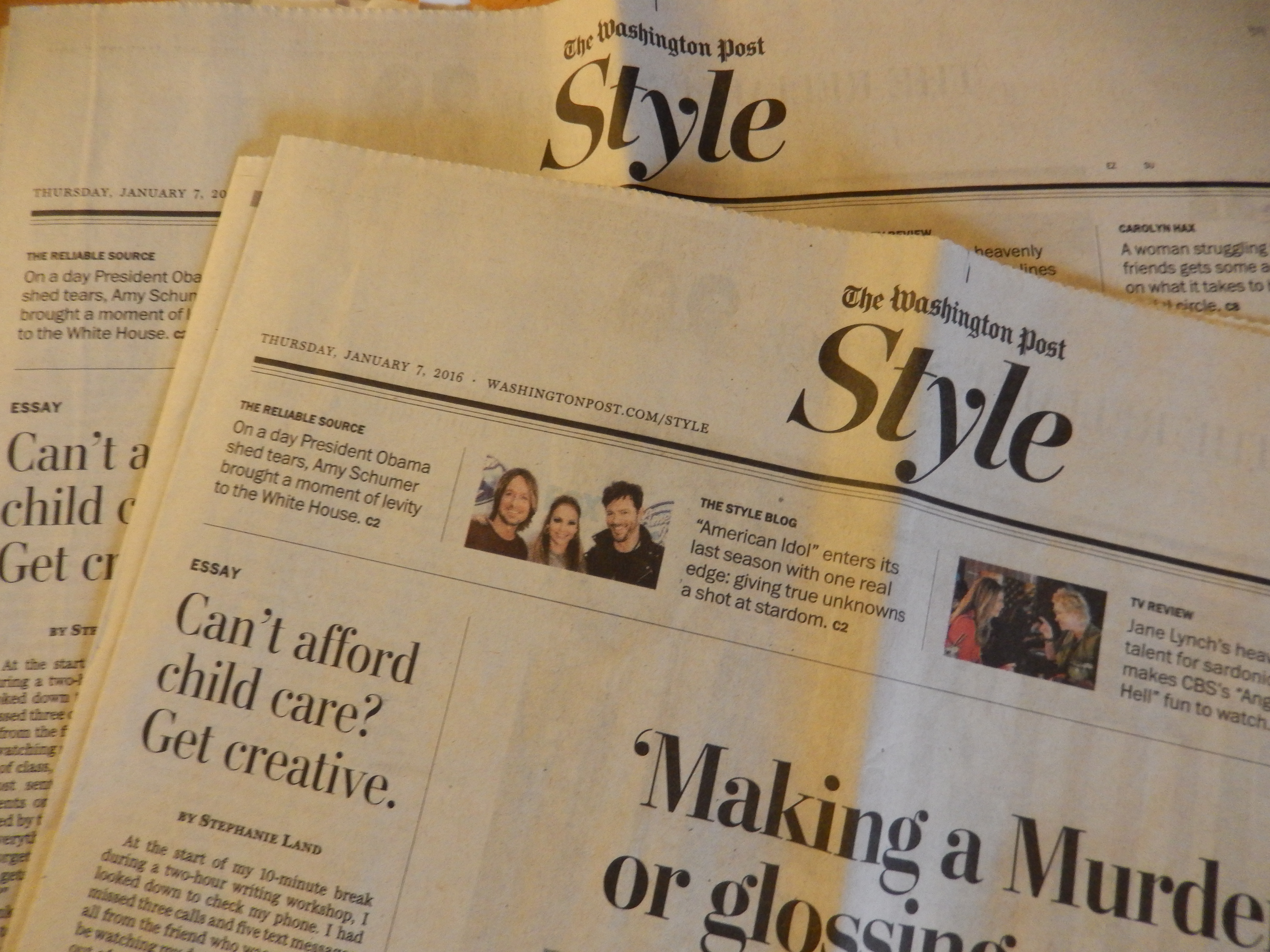 Despite all of this, I’ve already been published several times this year, and am putting the finishing touches on a book proposal that I hope to send out in the next week. My article through the Washington Post a couple of weeks ago made it to print in the newspaper. An essay featured in the Style section.
These last few months have been life-changing with Cora’s grandparents and father becoming a part of our little family. It comes with its own realizations of my own issues revolving around trusting others. In that sense, sometimes it’s easier to be alone.
All of my desires to find a suitable partner have faded. It might be from a mix of no longer having the ability to put energy into it, to wanting to focus on my family’s recent expansion and how that’s affecting everyone. I published a piece about it in the Washington Post the other day, ending with saying I’d try some sort of casual thing, but even that was too much.
I think it’ll be a long while before I can jump into anything like that.
But Coraline’s finally starting daycare two days a week. I don’t think I even need to say what a huge relief that is. It seems like things are always just on the brink of sailing smooth. Or sometimes they do for a while then dip back down to weekends like this where I have absolutely no money.
Darkest light’s before the dawn, you know. 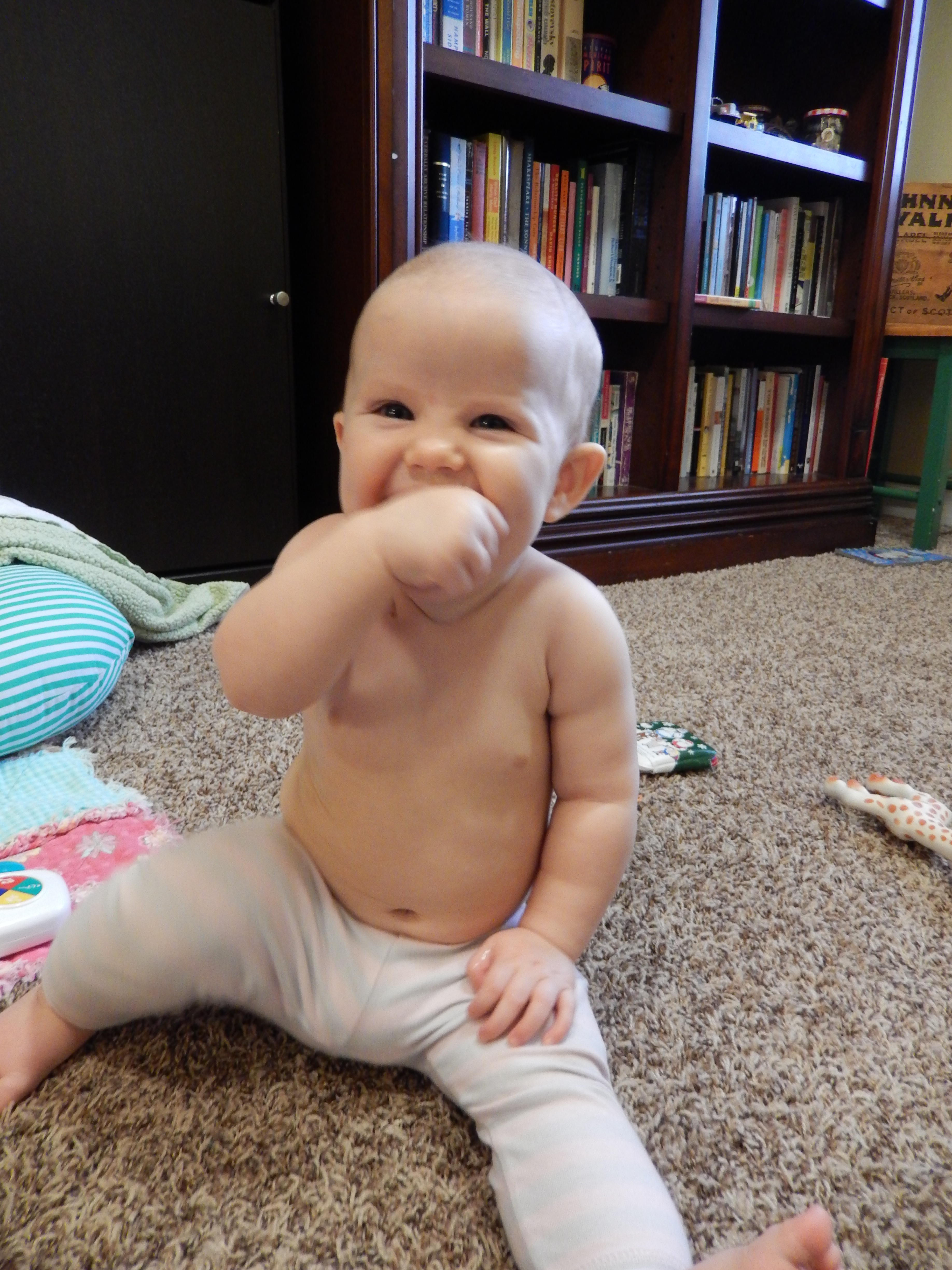 My dear Coraline Cairn,
We’re sitting at the kitchen table together. You’re eating banana pieces. You pick a chunk up with your long fingers, squish it inside your chubby hand, and raise your fist in the air. I imagine you thinking, “Behold! Banana!” but I know you’re not. Before the banana, you ate a puree that came out of a pouch. Whenever you see me take one of these out of the drawer, you start bouncing in your seat and laugh. Eating’s kind of your favorite thing in the world.
I needed to write this months ago. I should have been writing this sort of stuff down in the past nine months that we’ve been getting to know each other. I hardly have pictures of you, let alone a baby book.
What pains me is I know I’ll forget most of this. I won’t remember the sounds you made this morning as you woke up, but that you screamed at the top of your lungs for a whole month. This first year with you will fade to a blur, like your first months already have. I’ll be left with impossibly small onesies, a few photos, and some Facebook posts. My hope is, when you’re hurt by this as an adult, I’ll whisper that you’ve always been my favorite, and all will be forgiven.
Your sister doesn’t have a baby book, either. I did write about her all the time. I’ve been reading those scenes late at night. I can see your big sister at two so clearly through what I wrote. I remember how wispy her hair felt on my cheek. I remember her voice. I remember how impossible some days felt. Some minutes, even.
Even if I don’t end up writing about you as much as I’d like, or take pictures of you other than crappy ones from my flip phone, know that I am mindful of how short of time you’ll be a baby.
With your sister, I fought to own my physical space again, and spent most of the day preparing for bedtime. Almost every decision I made revolved around 7:30 at night when Mia went to bed. I sat in the next room, hoping she slept long enough to give me a break. Your sister started her years with a mom who clawed up the slippery slope that was completely losing herself in motherhood. She had a mom who struggled through depression, questioning her self-identity. Her mom was insecure, anxious, and so stressed.
You, my darling, don’t have to deal with that shit. 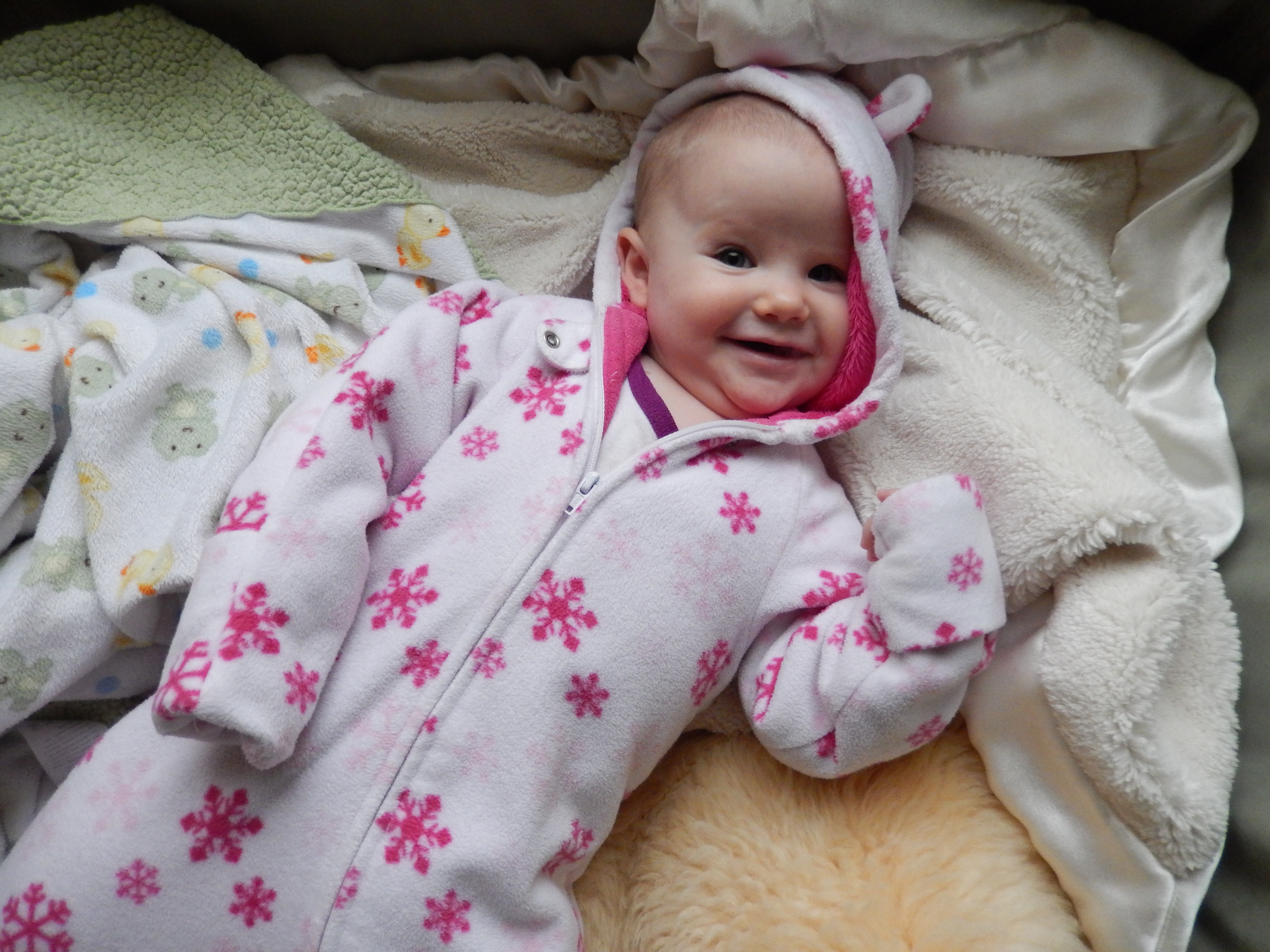 You were born to a mother who’d been doing this on her own for quite some time. Being home with you is like a sweet Saturday afternoon instead of crippling isolation and loneliness. I love our little bubble of an apartment, where I plan to keep all of us in for years, instead of moving every few months.
I kiss your sister goodnight in her own room with her big bunk bed and walk out to her Taylor Swift CD. She sets out her own clothes, bathes herself, and even ties her own shoes. Sometimes I offer to make her pancakes and she’d rather play outside with her friends. She reads to herself at night, and has math homework. She talks about boys and watches horrible TV shows that make me miss that blue puppy.
You watch her dance and jump around and laugh. And you’ll be just as big so fast, oh so fast.
So even though I lack in recording memories, know that I hardly ever put you down. I love when you sleep on my chest so I can rest my lips on your head, inhaling deep enough for your hair to tickle my nose. Know that even though we’ll forget most of these first years, you were rarely far from my arms, looking up and smiling at me.
With love.