I left my dog Bodhi alone today. Twice. And both times, she didn’t scratch at the door, leaving a scattering of paint chips on the floor. She didn’t bark and howl. She freaked out, but only a little, and it’s an improvement. 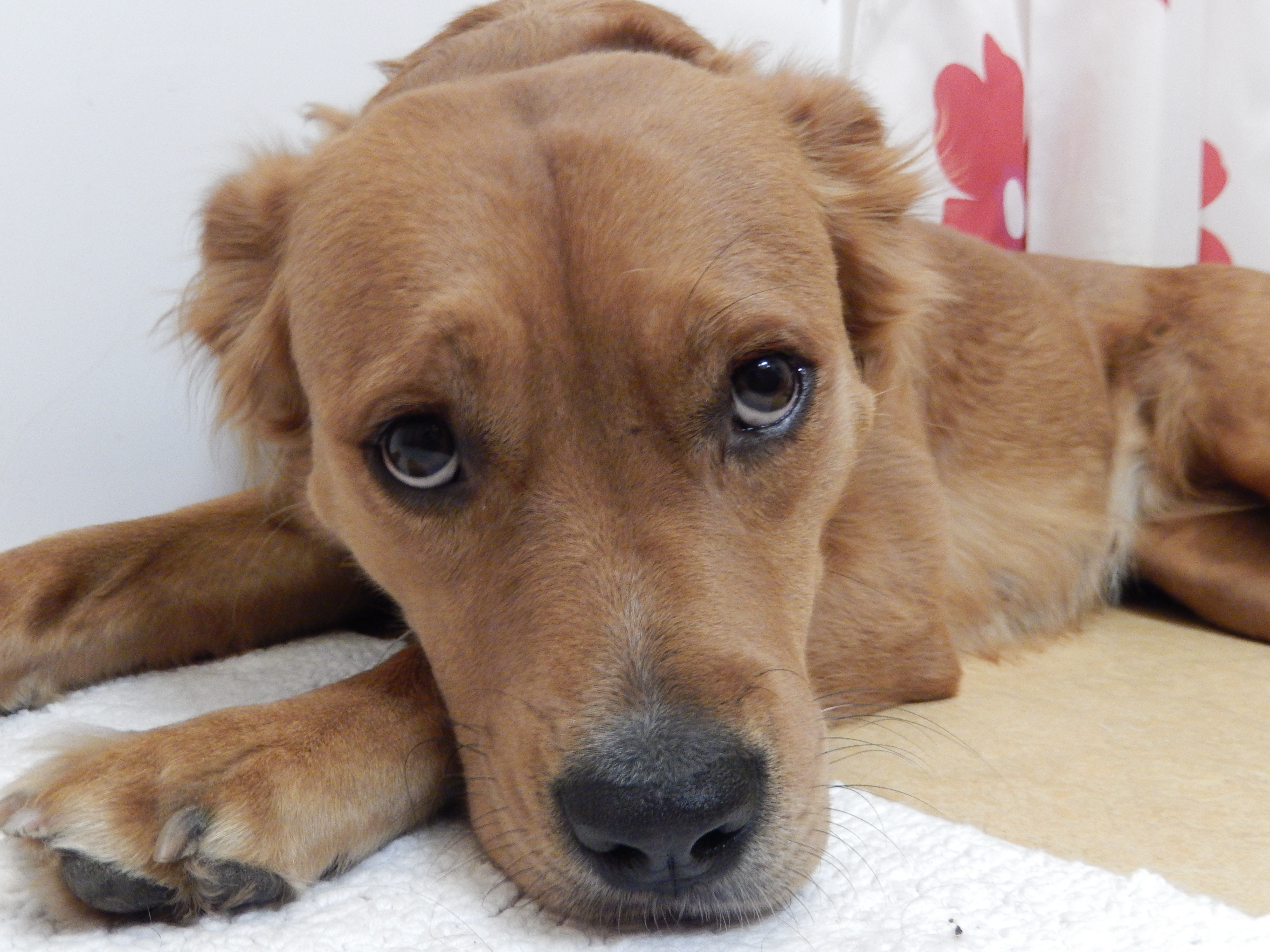 My journey in rehabilitating this dog, in helping her trust the world again, has worn on me in the last five months. In the last month especially, since I’ve had a regular babysitter come to the house who takes Coraline for walks, in turn leaving a helpless doggy mommy at home in a panic. I didn’t know this was a nightmare for her until it was too late, and we’ve had to start almost completely over in separation anxiety training.
I admittedly lost a little empathy for her then. Sometimes quite a lot. I’d get ready to leave, and she’d start panting and whining, and my first thought was, “Really? You’re really stressed again? Haven’t we been through this? Aren’t five fucking months of me coming home after I leave enough for you?” I’d get frustrated, and stopped calling her to me. Stopped petting her, when that was probably the time she needed it most.
What has interested me most in this process of getting to know Bodhi and in turn learning how to reassure her, is I find myself reflecting on periods in my life when I, too, recovered from trauma. I’ve gotten wise to the causes, and now live what most would call a solitary life, minus the two kids and scatterings of good friends. But at night, when I sit down to eat, when I have happy or sad events hive five me, or hit me in the arm or gut, I am the only one there to share them with.
These are the lonely times.
I’ve known Bodhi’s panic. I know what it’s like to watch the door close, the headlights shine through the windows and fade out of sight, and leave you in the dark. I know that panic of not wanting, not trusting yourself to be left alone. I know that feeling of complete loss of control. I know how she feels. I mean, as much as I can imagine, not being a dog and all.
But how do I tell a dog in human ways that I understand her? How do I tell her I’ll be there again in just five minutes because I need to run to the fucking store?
I can’t.
Maybe the training books have it a little wrong. The method’s not in trickery, confusing your dog so they never know if you’ll be gone for five minutes or fifty. It’s not in distraction of treats or toys filled with peanut butter. Maybe what needs to happen is confidence. 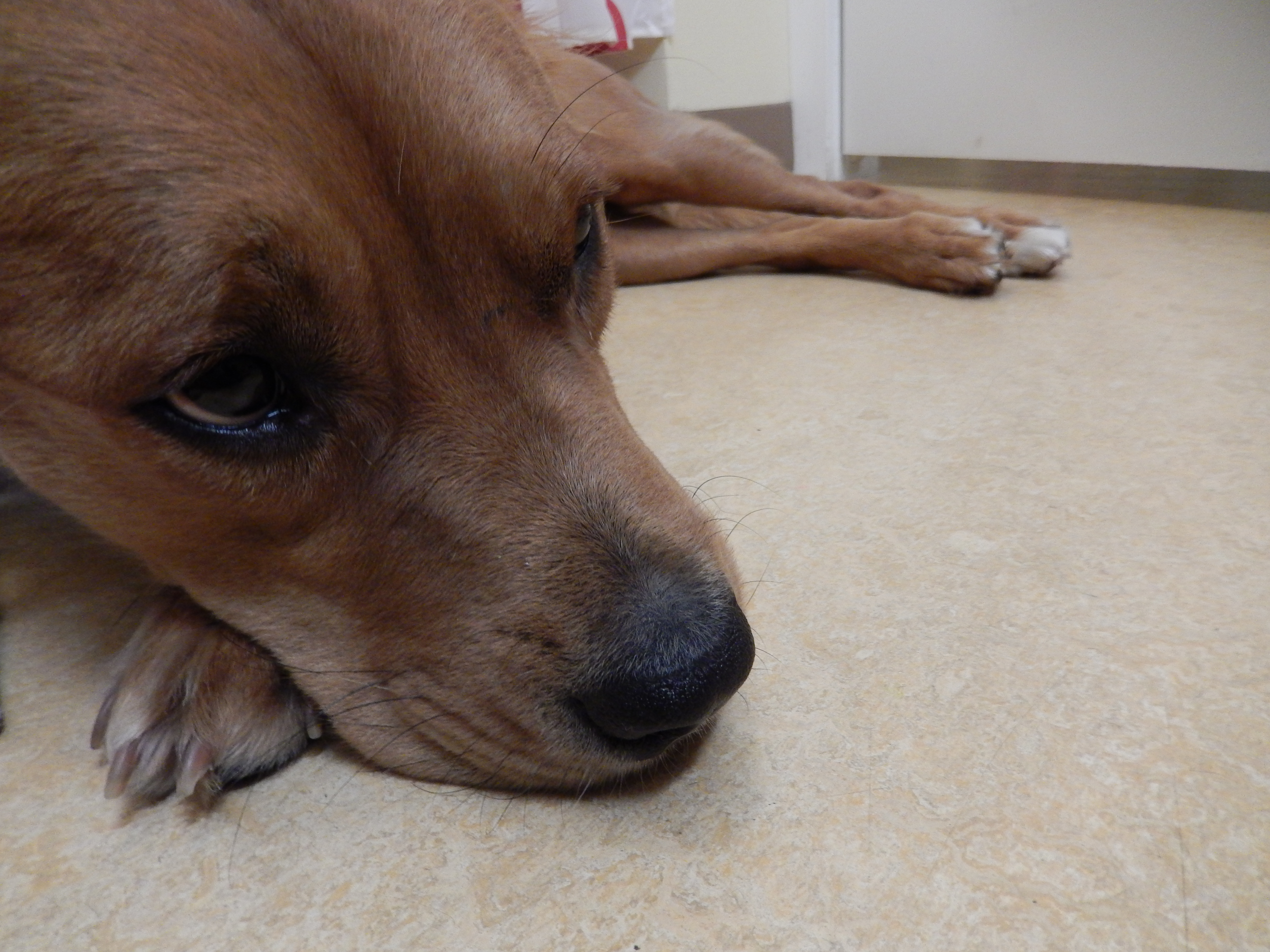 My dog’s on Prozac. She’s on Prozac because she acts like a woman recovering from years spent in an abusive relationship would act. She watches me for signs, trying to read my movements to give her a hint as to what I’m doing. She flinches. Hard. She constantly seeks attention, even when I’m mad. Especially when I’m mad.
When I first started reading up on separation anxiety, one website said to disengage yourself from your dog, to halt the connection, and possibly lessen it, so your absence won’t be such a loss. I tried this for a while, mostly because I tried everything, other times because I needed a break and couldn’t get one. This could be the worst advice I’ve come across. A dog who panics when you leave doesn’t need less love, she needs more. So much that when you’re gone, she still feels it, and maybe even starts to love herself a little, too.
That seems to be an important place to point to, and possibly the one we can pull from our memory and say, “This is when I learned how to be alone and that it was okay.” I can’t tell you when mine is, though. I’m still not sure if it is okay.
Because today I watched Coraline meet her paternal grandparents. They welcomed her with such love and joy and acceptance, and were so grateful that I brought her there. They followed her around and made her smile and whenever she walked on unsteady ground, a hand came out, just ten inches away, to catch her if she fell.
How better can family be illustrated than that simple gesture?
Instead of “What now?” say “How can I help?”
Instead of “What is wrong?” say “Here, come here. Do you need a hug?”
Loneliness, insecurity, and anxiety are the most primal of feelings, even in the family dog. Maybe especially in the family dog.
Bodhi has nightmares. She’s having one right now and I wonder what they’re about.
Maybe I don’t want to know.
step.

Lately I’ve been writing a lot about how it feels to live in poverty. I’ve been published or featured seven times in the last week. I’m waiting on three more to go through edits, and another two to go live. On Tuesday, I’ll stand on a stage in front of a class at the college where I just graduated and give a talk about freelancing. I took that class two years ago. 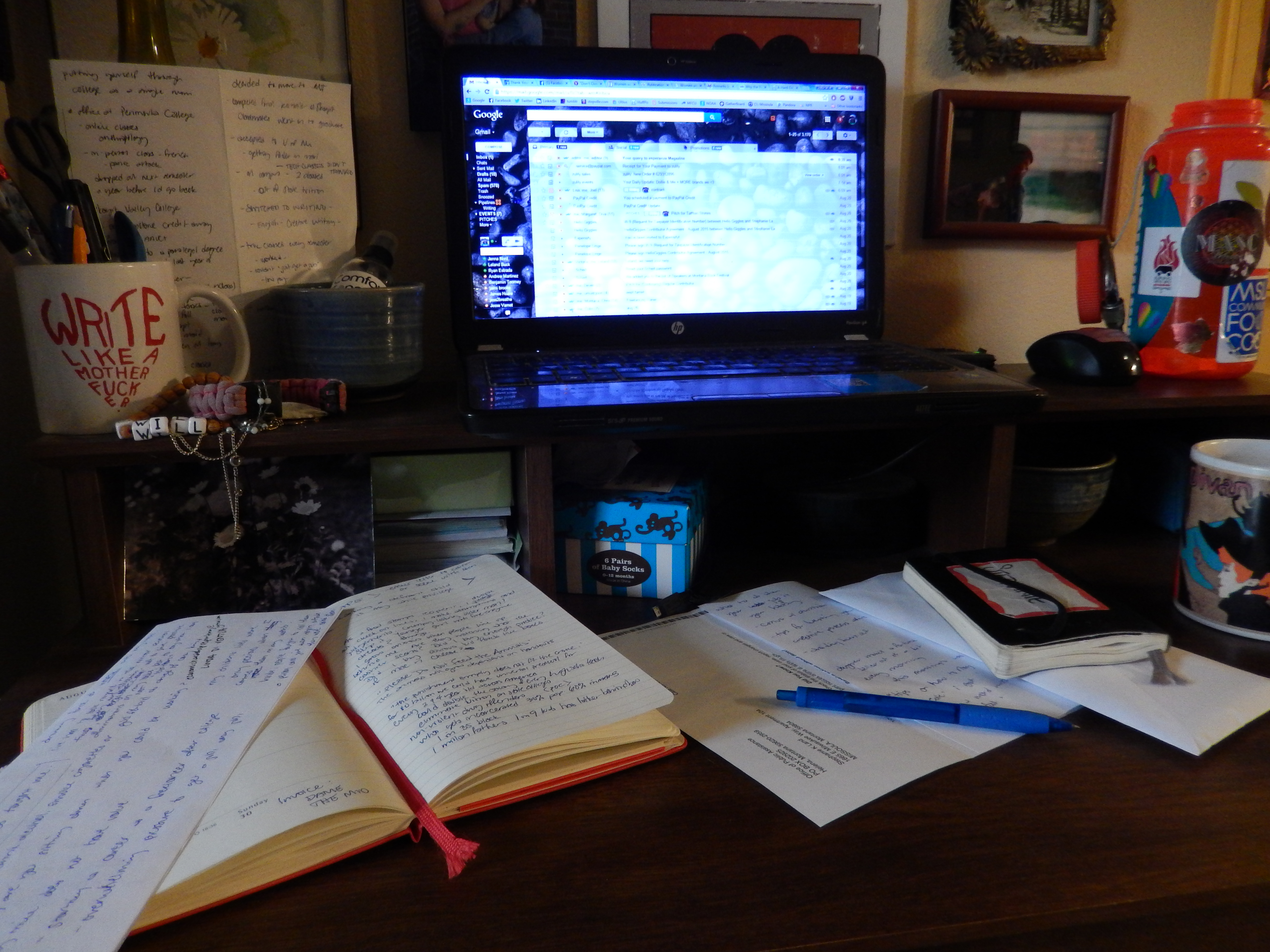 But that’s not even the biggest full-circle moment. I’m working my way out of poverty by writing about my experiences in it. By opening myself up and taking a risk of admitting to others (namely internet trolls) that I’m still struggling enough to qualify for government assistance, I am getting to a place where I don’t need it anymore.
My first piece through the Economic Hardship Reporting Project was published yesterday. It’s the first time I’ve ever published something that said the words “I’m on food stamps.” Yesterday I wanted to curl onto my knees and heave sobs because of those four words appearing on a website. It was admitting how hard this has been while knowing the journey is almost over.
The piece was about the stigma involved in being on government assistance, or welfare, as most incorrectly call it. It’s about being compared to a wild animal receiving handouts on social media. It’s about feeling that judgment and hatred every time I pay for groceries, or even select items off the shelf.
I can honestly say I’ve never felt encouraged to get a college education as a single mother. I especially didn’t feel encouraged to pursue writing. I felt encouraged to work. I felt like I needed to work as many hours as I possibly could, no matter how low the pay, to get ahead. This is an idiotic system. Why wouldn’t low-income people be encouraged to educate themselves to earn higher wages? Not only was I going to school, though, I was taking out the maximum amount of student loans to pay for our meager fixed expenses like rent, insurance, internet, gas, phone, and utilities. I worked my way through college, and received grants and scholarships, but still ended at $50,000 in debt. Graduating meant failing my family at a chance to own a house. 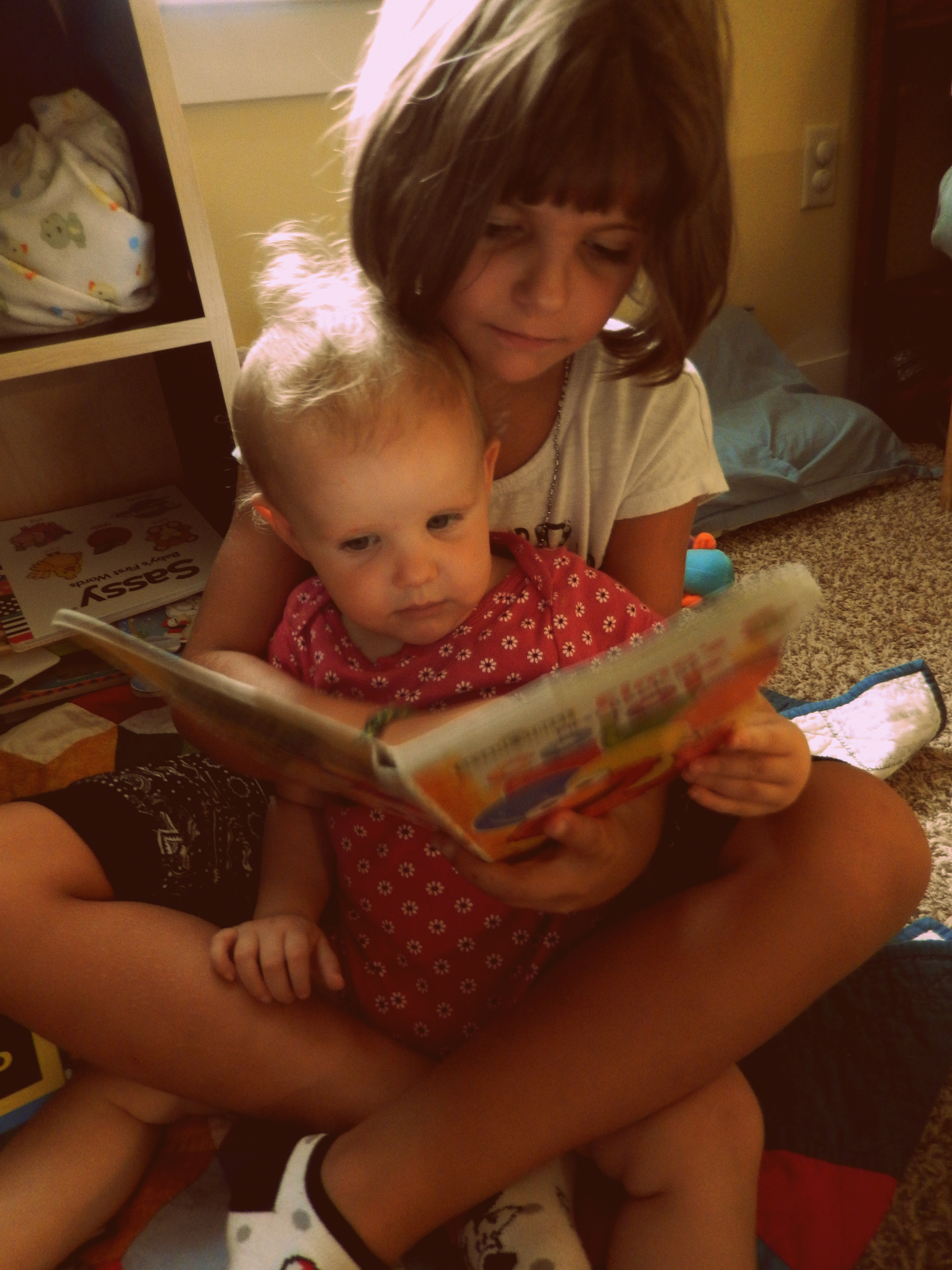 Without the degree, though, I don’t think I would have stopped cleaning houses. I don’t think I would have thought myself on the same level as the people whose houses I cleaned. I don’t think I would have set my sights on top of the mountain, instead of being okay with remaining in the comfort of the trailhead at a job that required little skill or brain-power. Not thinking, not going to school, only working, was easy.
In a sense, I still feel the pull to get a regular job. I’ve written about this before. I think it’s only because writing is such a hobby to me and I feel like I’m not truly working. What is work, anyway? To a low-income person, it means being on your feet, asking people if you can get them anything, and performing customer service in the most direct way possible. Even if you’re working behind the scenes as a janitor, you still have customers to please.
But we’re all working in customer service. We’re all freelancers. Nobody (hopefully) forces us to work and we can leave anytime. And somebody, somewhere, appreciates the work we do, even if they don’t notice it.
I’m sitting in a café right now. I have a store-bought coffee sitting next to my laptop. I’m waiting for emails from editors, sending off essays, and fielding comments on my social media platforms. Last night I stayed up until 2 in order to meet a deadline. The work is constant, a mad dash, and a delicious hustle.
I just found out The Guardian’s running my op-ed tomorrow.
I think I deserve the night off.
step.