“The only creatures that are evolved enough to convey pure love are dogs and infants.”
― Johnny Depp

I dropped my newly-turned 8-year-old daughter off at summer camp this morning. It was in a basement, there were no windows, but they had a lot of the usual morning chaos happening. My daughter didn’t look too thrilled to be there. She knew one other kid, our neighbor, and he was already in a deep conversation over the foosball table. I said goodbye, kissed her, hugged her, and told her the neighbor’s mom would pick her up at 5. Then I turned on my heel and walked out.
I had no worries about her running, crying, clinging to me, asking me not to go. Those days were in the past, and were primarily for my benefit. Mia’s always been one for independence. When I’d called to check on her after an emotional goodbye, her caretaker chuckled and said she was fine as soon as I left. “I think the tears were for you and not because of you leaving,” one told me once. Whenever I picked her up, it was rare that she was happy to see me. Which, let me tell you, gave me a huge “horrible mother” complex. But I’ve also made sure to put in years of constant reliability, showing up when I say I will.
That’s always been 75% of parenting to me.
Mia was about Coraline’s age when I started her at daycare. I just learned the months from 10 to 12 are a separation anxiety phase. Mia, of course, loved daycare, loved naptime, loved to sit at a table and eat with her friends, and took to the head teacher like she was a grandma. Coraline is a bit of a different story.
I thought Coraline’s attachment to me was the result of my solo mom status, but it’s just who she is. Since birth, Coraline would cry so hard if someone else held her, it took me a while to settle her . The only time she cried was when I put her down for more than a few minutes. By the time I found a woman (known locally as “The Baby Whisperer”) to watch her once a week, Coraline followed me around the house, her little hands clinging to my legs. If I picked her up, she’d squirm to be put down, then cry with her arms up, wanting me to pick her up again. For the last few weeks, she’s spent a lot of time in the Ergo carrier. It’s like a neutral place for her. I’m not carrying her, but she also has her chest pressed against mine.
Then there’s the dog. 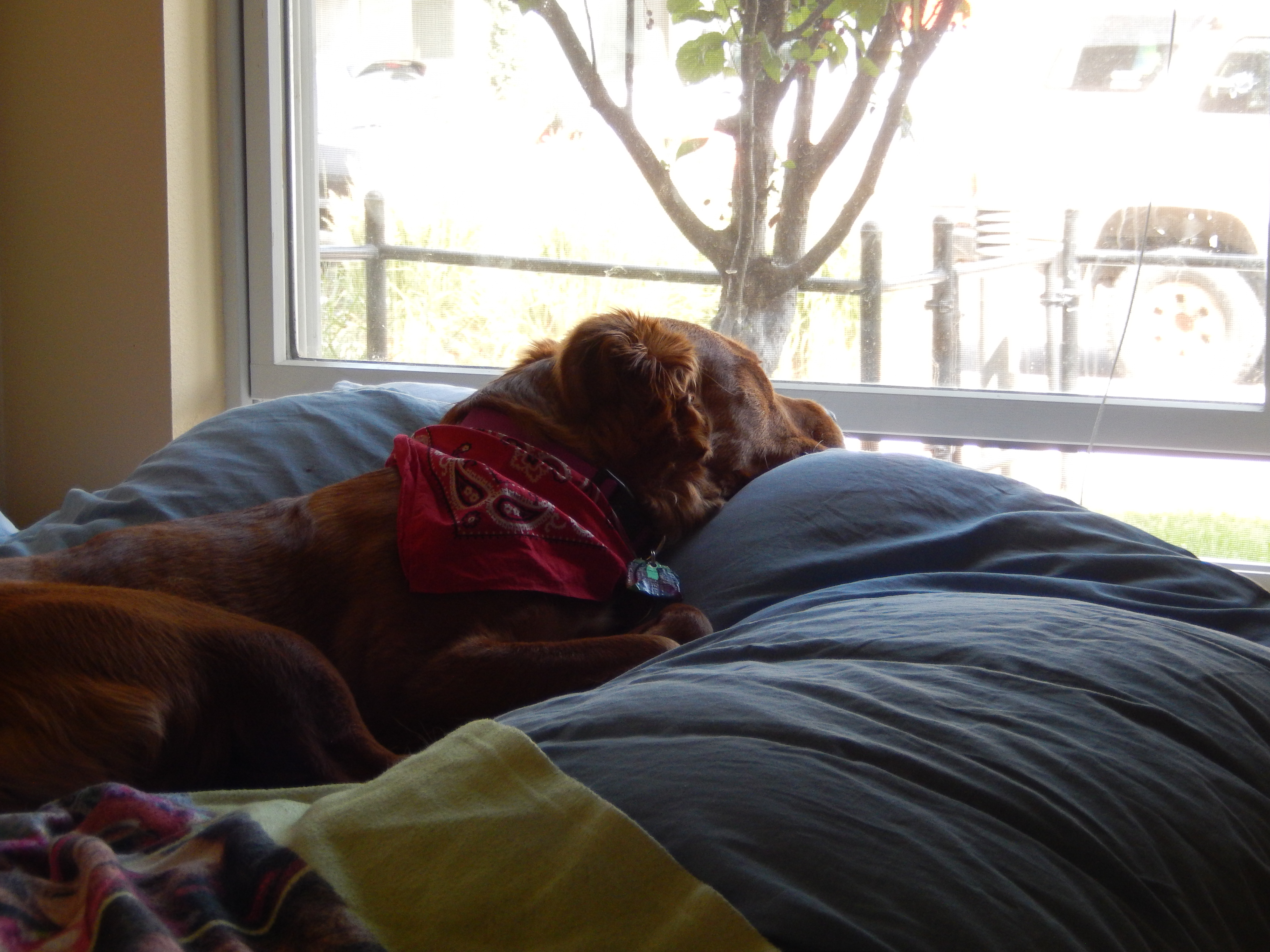 Bodhi’s separation anxiety got worse the more she bonded to me. I’d return and find her frantic, drooling, and the couple of times I had to leave her in her crate, she rubbed some of the skin off her nose. It’s already hot here, so there aren’t any times during the day that I can leave her in the car (which isn’t much better anyway). I’ve bought books, I moved her crate into my room and made it into a cozy den, I’ve purchased essential oils and thundershirts and better dog food. I have picked up my keys and put them down. I have walked out the door and left her for ten seconds, then thirty, and so forth. I’ve left her with my older daughter while I run quick errands (telling the neighbors across the hall of our building first). I think she’s slowly improving? I don’t know. If I move anywhere in the house, she’s so close she’s touching me. If I leave, she’s beside herself with glee when I return. I think I figured out a way to leave her alone for short times without her getting frantic, but I haven’t tested it too much.
This, of course, has been a lot of pressure on me.
I understand how she feels. I know panic attacks. I know that feeling of not being able to breathe, of feeling like you can’t move while your insides want to run. I know panic, thinking you’ll die, while your vision’s edges turn to black. I know it’ll take time before she doesn’t feel that with every trigger, and I know they won’t go away completely.
But I not only can’t walk around in my own home from a baby who cries if I avert my attention, I now feel like I can’t leave my house without doing some kind of damage to my dog’s recovery from trauma. At least with the baby, I know she won’t always prefer to take naps with her hands shoved deep into my armpits, grasping on to the hair there like a chimp. I know by the time she’s Mia’s age, she might be able to cope okay with being left alone for a day of camp. I hope so, anyway.
What I find most difficult about being a solo mom is being someone’s person without having my own. I am the end of the line. I have no one to turn to for emotional support. On days that Mia is unrelenting with arguing and my bank account has three bucks, I can’t fall apart and cry. I grit my teeth, clench my jaw, and take deep breaths. Tomorrow might not always be a new day, but it is closer to the end of this rough phase we’re all going through. It’s been my survival skill. I keep my mind a year ahead or sometimes more. If I don’t let myself fall apart, it won’t become a habit.
And we’ll get through this.
step.

Surrounded by the Essence of Her
Scroll to top